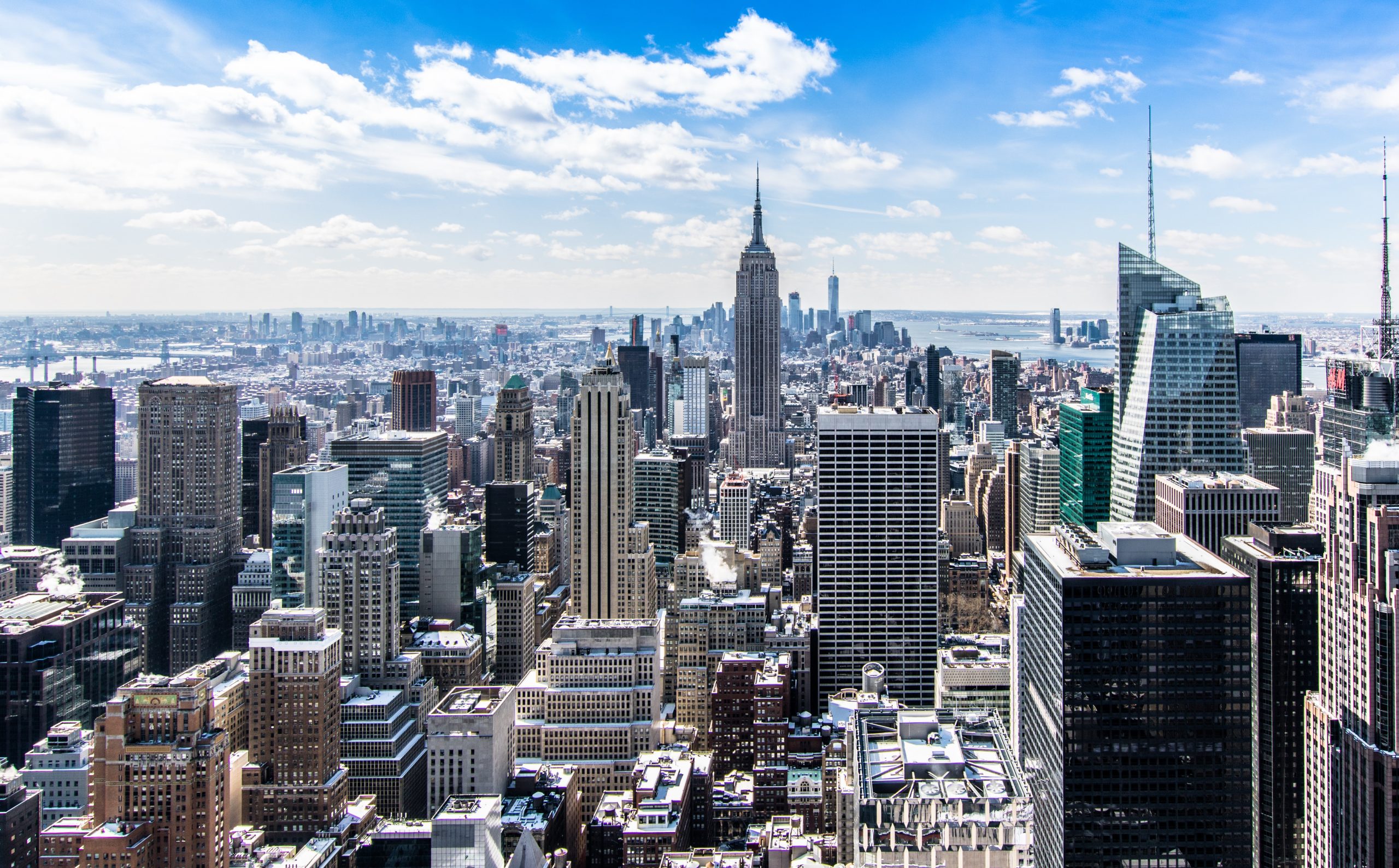 Ten Ways to Save on a Trip to New York

Shopping, Travel
David ZimmermanMay 24, 2022
We recommend products based on unbiased research from our editorial team. We may receive compensation if you click on a link. Read More.

New York City is constantly awash in sounds—honking horns, buzzing construction zones, and bustling humans. But there’s another sound that you’ll hear pretty much non-stop in New York. That’s the sound of the ringing cash register. There are millions of ways to spend your money in New York and most of them are expensive. From cocktails and dinners to shopping and shows, from Taxis to Time Square and Elevators in the Empire State Building, everything adds up in the city that never sleeps.

But New York is also incredible. There’s no place like it on Earth. The people. The places. The performances. New York is worth braving the crowds and costs for.

It is possible to have a rich and full experience on a budget in the big city. You just need to be a savvy traveler.  As the old cliche goes, you don’t want to look like a tourist. Well, there are few more obvious ways to look like an out-of-towner than to get ripped off at any of New York’s world-famous tourist traps.

But we can help you navigate Manhattan, Brooklyn and beyond at a reasonable price. If you’re planning a trip to New York, be aware that many places in the city take COVID protocols very seriously. Before you plan your trip, make sure you check out these 10 Ways the Pandemic Has Changed Travel.

Otherwise, check out these 10 ways to save money on your trip to New York.

1. Visit in the Winter

If you’ve never experienced a Mid-Atlantic winter, you really should. It’s bitter, cold, and frequently slushy. That’s exactly why traveling to New York from January through March is usually your best bet for cheaper flights and hotel rooms. New York is generally packed with visitors during the warmer months. And of course, the Christmas holiday is peak season for tourists so you’ll want to avoid it if you’re trying to save money.

But otherwise, make your trek to New York in the winter. It may be cold, but New York is actually beautiful in the winter. Ice skaters glide across the rink in Rockefeller Center. Fashionable people walk the streets in plush winter coats. Street vendors hawk handmade scarves and sweaters. If you’re lucky, maybe you’ll even get to see Central Park with a fresh blanket of snow.

Not only is there tons to see and do in New York, but there are worthwhile attractions spread far and wide. Manhattan alone is an elaborate network of neighborhoods from Greenwich Village and Tribeca to Harlem and Times Square. Beyond that, each of the other four Boroughs has an array of commercial, cultural, outdoor, and recreational attractions. It all depends on your interests.

Smarter Travel suggests that you “Group the sights that you want to see by neighborhood, so that you visit one area of the city each day (for example, visit the Statue of Liberty and Wall Street one day, and Central Park and Times Square another day). This will make the most of your time and save you money on the subway, and on Uber and taxi rides.”

The best way to pack in as much as possible during just a few days in New York is to plan each day strategically. Minimize the amount of transportation needed between sites. If you plan it right, it’s entirely possible to spend the better portion of the day moving swiftly on foot from one cool place to another.

Speaking of Ubers and Taxis, the fewer of these you use, the less you’ll spend in New York. The subways in New York are extraordinary. They go everywhere on your itinerary and they are extremely affordable. The difference in cost over the course of your trip will be pretty significant.

A 10-minute cab ride from Madison Square Garden to Williamsburg will cost you roughly $45. You’ll spend about 30 minutes in the subway, but the whole trip will cost you $2.75. In fact, that’s what it costs to get just about anywhere in New York by subway. If you’re not familiar with the New York subway system, do a little homework ahead of your trip. Once you know how to use the subway, you can get everywhere on a budget.

Since you’re saving so much on transportation, make sure you keep a few small bills handy at all times. New York’s subways are home to some of the world’s most talented, innovative, and diverse street performances, musicians, artists, and buskers. Show your appreciation by dropping a few bucks into a hat, jar or guitar case. After all, these talented folks will make your wait for the subway far more enriching than struggling to hail a cab.

New York is way friendlier than its reputation might suggest. In fact, people from the Northeast will tell you their whole life story if you give them a minute. When you’re out and about, ask the people that you meet where they eat, where they go for drinks, and where they catch live music on a Friday night.

People who live in New York find sustainable ways to do it. And paying tourist prices for food and drink is not one of them. One thing you may find when you start asking around is that New York has some of the best street vendor food in the world, and most of it can be had for the small bills in your pocket.

You’ll learn a lot more from a few minutes with a couple of actual New Yorkers than you can from hours of scanning Yelp! reviews. Don’t be afraid to make a few friends.

5. Get a Tourist Pass

Ok, so we know we said earlier that you don’t want to look like a tourist. But since you actually are a tourist, you should take advantage of the offers designed specifically for people like you…that is, people who plan to jam as many famous New York experiences into a few days as possible. There are all kinds of tourist packages where you can bundle a grab bag of tickets for most of the highlights on your Big Apple bucket list.

For instance, says Smarter Travel, “The New York Pass gives you entry into dozens of attractions over a set number of days for one fixed price. Another option is CityPass, which includes admission to either three or six museums and sights, including the Metropolitan Museum of Art and the Empire State Building, over nine days.”

If your plan is to visit most of the places you’d find on Trip Advisor’s Top 10 Things to Do in New York list, make sure you compare a few of these packages. This is a great way to enjoy a wide selection of attractions at a reduced rate.

6. Look for the Best Free Views

There are all kinds of boat rides around New York Harbor. They can vary in price from $20 to a few hundred if you’re after a fancy cocktails-and-cruising type of vibe. But if you’re mostly in it for the views, just hop on the Staten Island Ferry.

Why? Because it’s a totally free way to get out on the water and see New York Harbor. Not only that, but you’ll get a phenomenal look at everything from the Statue of Liberty and Ellis Island to Governors Island and Lower Manhattan. Skip the expensive boat tour and grab the ferry. Oh and by the way, the ferry is BYOB, so you can still have that cocktails-and-cruise experience if you really want.

The same logic applies to countless breathtaking vistas in New York. Via Hero says there are countless ways to take in the amazing views New York City has to offer for absolutely nothing, including from the lush High Line reclamation project and the Brooklyn Heights Promenade.

We tend to believe that views should, in principle, be free. Make sure you don’t get charged just for using your own eyeballs. That said, Via Hero says that if you must pay for just one vista, “The view from the Top of the Rock (Rockefeller Center) is pretty phenomenal—plus, you get to actually *see* all the famous buildings. So if you’re going to pay for a view in New York City, pay for a view there.”

If you’re the type who enjoys a structured experience, there is a way to get a few formally annotated tours without paying for them. According to Free Tours By Foot, you can download audio tours of a wide range of top New York destinations like Central Park, the Brooklyn Bridge, the 9/11 Memorial and World Trade Center, Grand Central Terminal and much more, all for just $2.99 apiece.

For just a few dollars, you’ll get a fully self-paced, in-depth guide to each of these destinations. With tour audio provided by actual New York City tour guides, it’s like having an expert right in your ear without the added cost. And if you’d rather spend nothing at all, Free Tours By Foot does offer deeply extensive online tourist guidance for anywhere you might want to visit in the Five Boroughs.

While you can get the basic tour experience for free, one thing that will definitely cost you real money is the theater experience. Fortunately, there are all kinds of brokers who specialize in cutting the cost of your Broadway tickets.

For instance, Via Hero points to sites like TKTS Booth, which may sell tickets to select Broadway shows for as much as 50% off. Naturally, you aren’t likely to get tickets for in-demand shows like Bruce Springsteen on Broadway or Hamilton for cheap. Frankly, you’re lucky if you can grab tickets for some shows at all.

But if you’re open to bargain hunting for tickets to some of Broadway’s stalwart productions with wider ticket availability, you could find some pretty great deals.

And if you’re looking for a live performance experience at no cost at all, apply to be part of the live studio audience for a show taping. Countless famous daytime talk shows, late night comedy shows, and game shows film in New York. It costs nothing but good luck to be picked for a seat in a studio audience. If you are selected, this can be a really fun and unique experience, especially if you’ve never been part of a television broadcast taping before.

9. It Doesn’t Cost Much to Experience New York’s History

You may have to spend a fortune to see Hamilton on Broadway, but you get to visit the actual guy for nothing. According to Via Hero , “Some of our favorite places to visit in New York involve history (like Alexander Hamiton’s grave at Trinity Church, the Civil War arch north of Prospect Park, and…Grant tomb).”

If you’re a history buff, New York is rich with fascinating and free destinations including classic architecture, important federal buildings, and countless cultural landmarks. Make your New York experience into a historical sojourn for a cost effective and compelling journey through time.

As long as we’re on the subject of things that cost nothing, New York is blessed with countless sprawling, beautiful, diverse, and downright fun parks and green spaces. Don’t underestimate the amount of time you could spend in just a single park, while stopping only to give a few dollars here or there to a food vender or  street performer.

Prospect Park, Washington Square Park, Riverside Park and Central Park are all remarkable, massive and filled with recreational opportunities. But New York is packed with beautiful squares,  bustling plazas, and charming little pocket parks. Spend time wandering, taking in the sights and sounds, and keeping your money mostly in your pocket.

And if New York is just one stop on a much bigger trip, check out these Ten Ways to Travel for Free…and Maybe Even Get Paid to Do It.