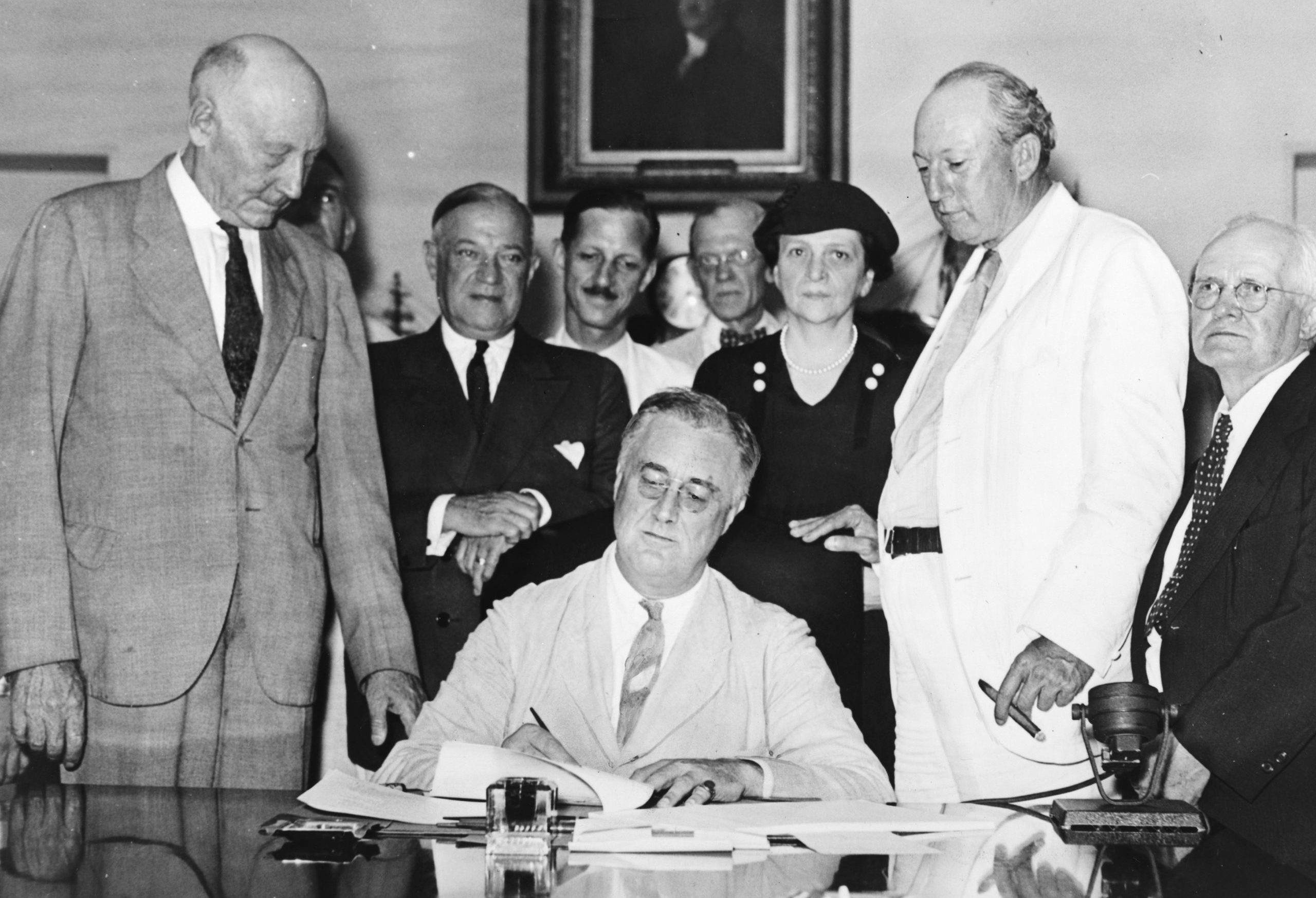 History and Background of the Social Security Act of 1935

Economics, Money
John EhrlicFebruary 11, 2021
We recommend products based on unbiased research from our editorial team. We may receive compensation if you click on a link. Read More.

Economic security is important to everyone, but for centuries, people who were economically disadvantaged had little to protect them from serious problems like hunger and homelessness. Often, some of the poorest citizens in a society were the elderly, who could no longer work to support themselves. This problem was always worse in difficult economic times, never more so than during the Great Depression. Against this backdrop, the Social Security Act was conceptualized and signed into law.

What Is the Social Security Act?

The main purpose of the Social Security Act, a federal law that was signed by President Franklin D. Roosevelt in 1935, was to provide a financial safety net for the elderly. The law would provide benefits for retirees as well as help for the unemployed and the disabled. Since its creation, the Social Security Act has helped millions of Americans to meet their basic needs, although its existence has been threatened on numerous occasions by a variety of factors.

Before 1935, America had a social structure that helped to mitigate the effects of economic hardship. Often, people would live on family farms, and elderly family members would live with and be cared for by their children and grandchildren. However, the urbanization of America in the late 19th century, the Industrial Revolution, and longer life expectancies led to increased economic instability. People flocked to cities in search of new jobs, leaving their families behind. But while you couldn’t be laid off from your family’s farm, you could lose a factory job at any time, leaving you on your own without an income. Meanwhile, as citizens lived longer, they required more care and support as they aged and became unable to work.

The largest source of financial devastation in America came about in 1929, when the meltdown of the stock market sparked the Great Depression. Economic conditions worsened as a severe drought created the Dust Bowl, devastating family farms. Poverty-stricken farmers were forced to migrate in search of jobs, which were hard to come by during the Great Depression. The unemployment rate was high, and millions of people struggled to meet their basic needs. The elderly suffered disproportionately amid the Great Depression, leading citizens and government officials to consider ways to increase financial security.

President Franklin Roosevelt proposed an approach to improving financial security that borrowed from strategies used in Europe. This new plan would allow Americans to contribute to their future financial security through payroll deductions. Under Roosevelt’s proposal, current employees would contribute a portion of their income to finance a monthly allowance for the elderly, creating a cycle that would ensure help for everyone who could no longer work.

In 1934, Roosevelt created the Committee on Economic Security, which was given the task of fleshing out the details of his idea. The result was a report outlining a plan for providing benefits to the elderly, disabled, and unemployed. The committee drafted a piece of legislation that would become the Social Security Act, and after extensive debate, the act was signed into law on Aug. 14, 1935.

Social Security From Then to Now

Since the signing of the Social Security Act in 1935, this legislation has undergone many changes. The law was amended in the 1950s to make self-employed professionals, some federal employees, and domestic and farm laborers eligible for benefits. In 1960, President Dwight D. Eisenhower signed a measure that would grant benefits to workers who were disabled and those depending on them for financial support. In 1965, amendments to the legislation created medical insurance programs for the elderly (Medicare) and the poor (Medicaid). More recent changes have been made under presidents Ronald Reagan, George W. Bush, and Barack Obama. Notably, the Reagan administration raised taxes to help keep the program solvent, and under the Bush administration, qualified foreign individuals and their children became eligible for disability assistance and food stamps.

The Future of Social Security

It’s hard to predict the future of Social Security, especially since the program is predicted to exhaust its trust fund by 2035. As more and more of the large baby boom generation reaches retirement age and as life expectancies continue to grow, many of today’s workers are skeptical that Social Security benefits will be there for them when they retire. However, while many fiscal conservatives have pushed to shrink or abolish the program over the decades, it remains popular with most Americans, many of whom would be in favor of higher taxes if it meant keeping the Social Security program.